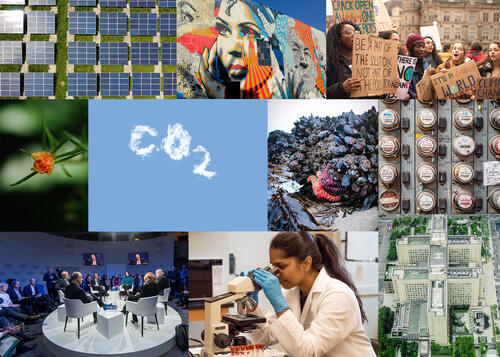 Earlier this month, Yale awarded nearly $1.5 million to twenty-one proposals in its inaugural round of Planetary Solutions Project seed grants, with the majority of funding coming from the Climate Impact Innovation Fund.

“The Climate Impact Innovation Fund is a resource for faculty and staff across the university who wish to address climate change and climate-linked health and justice issues,” said Casey R. Pickett ’11 MBA, ’10 MEM, Planetary Solutions Project director. “By supporting the earliest stages of research, it empowers Yale faculty to pursue out-of-the-box or high-risk ideas that are more difficult to fund through traditional sources.”

Many scientists believe that the window to avoid or reduce the worst effects of climate change is narrow—and closing quickly. Reflecting this urgency, the Climate Impact Innovation Fund will be spent down within thirty years, maximizing its ability to generate timely ideas for net-zero carbon emissions and sustainability.

The fund prioritizes work on scientific research in areas such as greenhouse gas emissions and cleaner energy sources, resilient ecosystems and infrastructure, and efforts to protect public health, particularly for communities and populations that are disproportionately harmed by a warming planet.

“Yale faculty and staff across the university have expertise that can be applied to the most urgent questions of climate change,” said Provost Scott Strobel. “The Climate Impact Innovation Fund, with its emphasis on early-stage research, is a valuable resource that can fuel new ideas, spark collaboration across disciplines, and advance a more sustainable future.”

The Climate Impact Innovation Fund has just made awards in the following critical areas:

Repurposing captured carbon dioxide: One area of newly funded research is the reduction of atmospheric carbon using advanced carbon capture and utilization technology. As levels of carbon dioxide in Earth’s atmosphere threaten our climate, one solution may come from removing that CO2 and repurposing it for industrial processes, taking advantage of the potentially vast market for captured CO2. A recent study showed that the market for utilization products could be as high as $800 billion by the end of the decade, which would use 7 billion tons of carbon dioxide per year.

The capture and conversion of carbon dioxide into useful products is a technically challenging process, one that researchers in chemistry and engineering aim to improve with the help of this funding. Several lines of research now under way seek to identify the best types of catalysts to form commercial products from atmospheric CO2.

A new kind of wood: Another project to decrease the amount of carbon in the atmosphere comes from Yale’s School of the Environment, where researchers study the potential of “moldable wood” to replace more carbon-intensive materials like steel and concrete. The researchers have already found a way to reconstitute the cellular structure of wood, resulting in a material that compares to aluminum alloys in terms of strength and potential usefulness for buildings and transportation applications.

Expanding on this work, researchers are now assessing the net carbon consequences of wood products, ensuring that widespread adoption of “moldable wood” would be net positive for forest carbon stock and affected ecosystems. Support from the Climate Impact Innovation Fund will help in this effort.

Efficient solar energy: Yale’s work in solar energy will also be supported by the Climate Impact Innovation Fund, with researchers in mechanical engineering and materials science, chemical engineering, and applied physics aiming to develop a proof of principle for a more efficient type of solar cell. Using the bulk photovoltaic effect, this technology could bypass efficiency limits of conventional photovoltaics, gathering more of the solar spectrum and increasing the efficiency of solar energy harvesting.

More resilient crops: As part of Yale’s effort to adapt to climate changes, scientists aim to use gene-editing in crops to help them tolerate a warming climate. In the very first experimental test of its kind, researchers in Ecology & Evolutionary Biology and Molecular, Cellular and Developmental Biology hope to demonstrate the advantages of the C4+CAM photosynthetic pathway for drought resistance by using selective gene editing. An award from the Climate Impact Innovation Fund will advance this work.

Reform agenda for global trade: Yale plans to bring together trade experts and thought leaders from different backgrounds, countries, and perspectives to develop a foundation of academically rigorous white papers culminating in a set of reform proposals that ensures greater alignment between the trading system and environmental sustainability. The Climate Impact Innovation Fund is supporting this effort.

Through its early and strategic establishment, the Climate Impact Innovation Fund is playing a key role in Yale’s ability to jumpstart exciting faculty projects and research focused on creative solutions to the issue of climate change.